Very many people climb to the summit of Ireland’s highest mountain, "Carrantuohill', at 3,414 ft. But few realise that while many have died trying to reach the summit, five Americans lost their lives on a nearby summit during World War Two. 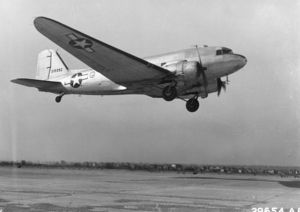 This particular Aircraft, the C 47, was the military version of the famous DC3 or in British terms "The Dakota". It was brand new when the United States Army Air Corps took delivery of "43-30719" in June 1943. It was built by the Douglas Corporation at Long Beach, California at a cost of $109,000.
The winter route for this C 47 was from the USA to England on a ferry flight in preparation for D-Day, was from Morrison Field - West Palm Beach, Florida to St. Eval - Cornwall via British Guiana and Dakar in West Africa to Port Lyautey in French Morocco. At Port Lyautey, the C 47 refueled and took on a cargo of Battle Bicycles (this will be explained later) and medical supplies, but contrary to other official reports, no nurses were on board.
The crew comprised of the following (TCG-Troop Carrier Group), 2nd Lt. John L. Schwarf (Pilot) of San Ardo, California (63rd TCG). 2nd Lt. Laurence E. Goodin (Co­pilot) of Springfield, Ohio (63rd TCG). 2nd Lit. Frederick Brossard (Navigator) of Washington DC. (437th TCG). Staff Sgt. Arthur A. Schwartz (Engineer) of Wilmington North Carolina (Army). Staff Sgt. Thomas L. Holstlaw (Crew Chief) of Luka, Illinois (Army).
.
The Aircraft took off at 10.30pm on the 16th of December, 1943 from Port Lyautey for St. Eval in Cornwall. The routing would be mostly over water and strict radio silence had to be maintained over 'The Bay of Biscay' where Luftwaffe Junkers JU88's were on heightened alert.
Our C 47 was accompanied by four other C 47s. A course change was due off Cape Finnestere in Northern Portugal but our C 47 never made it. But continued in a Northerly direction and at approximately 6.00 am on the morning of the 17thof December, 1943 and in total darkness the C 47 arrived over the Dingle Peninsula. In order to locate where they were, the aircraft dropped altitude to approx. 2,000 ft. Not realising they were in an area of 3,000Ft summits, The Brandon and the McGillycuddy Mountain Ranges in its immediate vicinity. I suspect that the crew may have confused the Dingle Peninsula with South West Cornwall.
At approximately 7.00 am, the aircraft slammed into the ridge above Coomena Peasta Lake at an altitude of 2,000ft. Four of the crew died instantly. Staff Sgt. Arthur Schwartz, a man of 16 stone crawled away from the ensuing fire and died wedged between two rocks.
Should the story end there, I think not!
Many historians will tell you that the aircraft crashed on the 3rd of February, 1944. This was the story told at the time and historians carried it forward until 1981, than I began my research. After three years of difficult groundwork I surmised a local person returning home from an all night card game, observed something on fire high up on the mountains on 17thrdof December, 1943. He told his neighbour and both persons "visited" the crash site on St, Stephen's day, the 26thof December, 1943. They would have seen the charred remains of the crew inside the still smoldering aircraft. They too would have seen the body of Staff Sgt. Schwartz wedged between the rocks, the only injury observed would have been his scorched back. They would have seen the gold ring on his wedding finger and they certainly saw the Battle Bicycles.
These bicycles were to be used by the 101st Airborne Division (the Screaming Eagles) of the American Army. They were to be parachuted behind enemy lines in German occupied France on the 6thof June, 1944; the smoldering fuselage and bodies were looted.
Finally on the 3rdof February, the Gárda Síochána in Beaufort were notified, and they in turn contacted Army Brigade HQ in Limerick. On the morning of the 4thof February, 1944 a detachment of the I5th Inf. Btn. from Ballymullen Barracks in Tralee arrived at Mealis and walked to the crash site. The recovery of the victims was dangerous. Some of the Army Party were led to believe that the Aircraft crashed on the 3rdof February, 1944 and indeed all future crash reports carried that date. The five bodies were coffined at the GorthBee Youth Hostel and they were brought to the Town Hall in Killarney where an inquest was held on the 6thof February, 1944. The five coffins draped in the "Stars and Stripes" were buried with full military honours in the New Cemetery Killarney. However in June 1944, the coffins were exhumed and reburied in the GI Cemetery near Belfast.
In 1946 the coffins were exhumed again. The bodies of 2nd Lt.s Schwarf, Goodin and Brossard are interred in the U.S. Military, Cambridge, England. While Staff Sgt. Holstaw was reburied in Luka, Illinois alongside his mother. His father Thomas died in 1947 of a broken heart. Staff Sgt. Holstlaw was an only child.
Staff Sgt, Schwartz was reburied in Beni-Israeli Jewish Cemetery in Wilmington, North Carolina.
A memorial ceremony was held at Cronin's Yard, Mealis, Beaufort on the 19thof August, 1984 in the shadow of the crash-site. The then US Army Defence Attaché of the American Embassy "Colonel Carl Finstrom" unveiled the memorials. 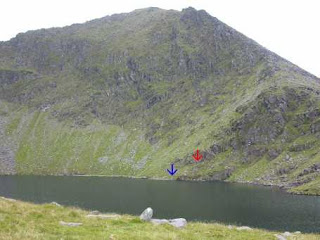 Cnoc na Péiste from the shore of the lake. Blue arrow indicates the location of a blue rope which is tied to the wing in the water (and to a rock on the other end). No use pulling it: the wing is too heavy. The red arrow shows the location of a memorial plate. The plane crashed into the mountain 500 feet above this plate

Extracts taken from an essay by Ger. O'Regan and also Mountainviews.ie

Posted by KERRY CLIMBING at 9:09 PM 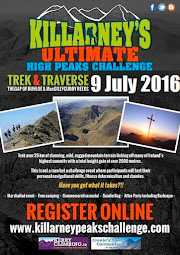 Click the pic to go to High Peaks site 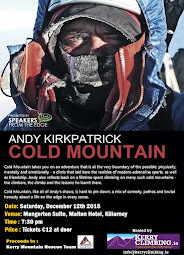 SOME OF OUR WALKS,SCRAMBLES AND CLIMBS

These are just some of what we've got planned...

Fab day and thanks for all your expert help...Deffo will be back.To all out there,KerryClimbing Rocks!!!

The lads and I had a BRILLIANT day climbing Corrán Tuathail...You have been highly recommended!!!

Thanks for a fantastic 2 days climbing in Kerry...3 Cheers for those who dug deep and summited on day one and 3 cheers for KerryClimbing!!!

Hi Piaras,just a quick note to say a huge thank you for an amazing
day on the kerry mountains.The day far exceeded my expectations and turned out
to be an adventure of truly epic proportions,at least by my humble standards
anyway.I cannot wait to return again and face a new challenge,what a way to
spend a day.Your professionalism,friendliness,courtesy and matter of fact
attitude immediately relaxed us before we had left the car park and banished any
doubts of our safety or ability and ensured that we started the day full of
confidence and anticipation.Your love of the outdoors is very apparent and rubs
off on everyone around you.Thank you for a fantastic experience which I will
never forget,and hopefully will add to in the future.

"Moonlight in the Mountains"

See the mountains in a different light on one of our "Full Moon" walks!! 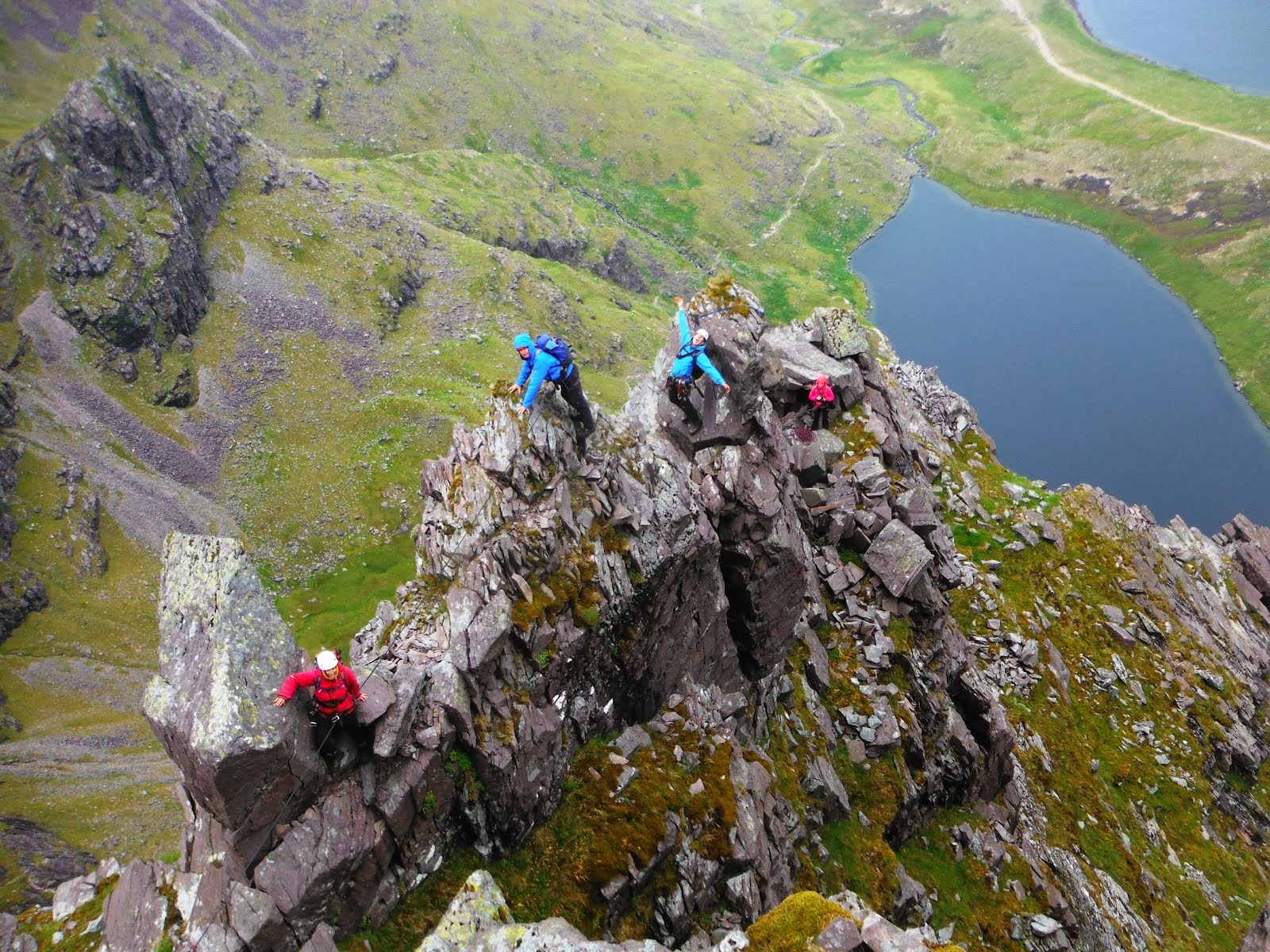 Leisurely and Informative walks to suit the whole family..

Tailor made days to help you get in shape for charity walks and climbs or future goals.. 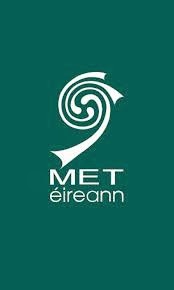